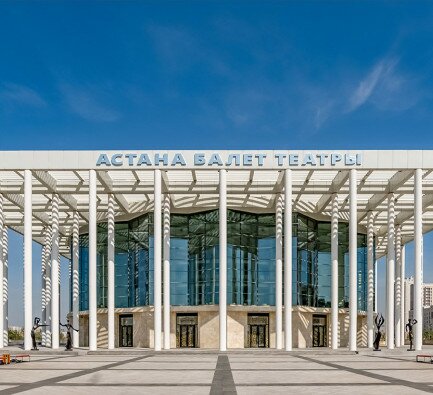 The ASTANA BALLET Theater was founded in 2012 on the initiative of the head of State Nursultan Nazarbayev. In four years, 10 one-act ballets and 4 concert programs were created. Among them are the ballets "Alem" (choreographer N. Dmitrievsky, Russia)," Zhusan"," Carmen "and" The Language of Love "(choreographer M. Avakhri, Kazakhstan)," The Mists of Time " (choreographer I. Jan, China) and others. Such famous choreographers as A. Tati and A. Alisheva (Kazakhstan), Paul Gordon Emerson (USA) worked on the program "Eastern Rhapsody"; the program "From century to Century" was directed by A. Asylmuratova (Russia). With this repertoire, the ASTANA BALLET Theater has performed at the most famous venues in Moscow and St. Petersburg (Russia), Beijing (China), Paris (France), Vienna (Austria), Seoul (Korea), Budapest (Hungary), Baku (Azerbaijan) In New York (USA) and in a short period of time won fame and recognition not only in Kazakhstan, but also in the world.

The entrance group begins with the chiseled figures of the dancers. They look spectacular against the background of light walls and glass. Instead of traditional marble columns, stoneware, steel, glass, and wood are used. The hall of the theater, at first glance, is significantly different from the usual opera and ballet halls with gilded stucco. Both the building and its interior are decorated in a modern style, calm and spacious. The architectural style of the new theater has become a kind of reflection of the desire of the young team to find their own original handwriting, to find a unique creative face, to preserve all the best of the classical heritage and to enrich the plastic language with bright, memorable innovations. The interior of the foyer and the auditorium of the Astana Ballet Theater is distinguished by restraint, simple lines and finishing without much frills. Everything is functional and harmonious. The rooms of the spectator and demonstration complexes, for all their brevity, are characterized by grace and elegance, refinement and lightness.

The auditorium has 783 seats (ground floor for 609 seats, 1 tier of the balcony for 104 seats, 2 tier of the balcony for 70 seats). The restrained color scheme of the auditorium does not distract attention from the stage. The design of the hall uses calm, noble shades: golden-brown curtain, saffron upholstery, brown floor. For the convenience of the audience, there are two buffets and spacious foyers. The main lobby offers a beautiful view of Uly Dala Avenue and the central building of the EXPO-2017 complex. Visiting the theater will not be ordinary. Each visit to the theater will be a memorable event for the audience, a celebration of familiarization with one of the highest expressions of art.

The building of the new theater is highly appreciated for its architecture and modern stage equipment, thanks to which it is considered one of the best theaters in Kazakhstan. The new theater venue meets all modern standards of theater space organization. The stage area is 536 m2. The stage complex (stage, proscenium, backstage, pockets) is more than 1000 m2. The orchestra pit is designed for 50-60 musicians. For the transformation of the stage, the latest technologies of mobile and lifting and lowering mechanics are used. The stage is equipped with 4 lifting plates and 4 artistic lifts.

The Astana Ballet Theater can host performances of the most complex scenography. Technical solutions for mechanical equipment and control systems allow not only to quickly change the scenery during the performance, but also greatly facilitate the solution of various mounting tasks. The possibilities of the stage of the Astana Ballet Theater open up space for directors and set designers to implement original ideas. The lighting complex includes both traditional theater devices and systems, as well as the latest innovative developments in this field. 53 shtanketa allow you to place the necessary equipment. To ensure the high quality of artistic lighting, about 800 lighting devices were installed. Special equipment allows you to fully use the capabilities of video projection. This feature of the new venue will attract the attention of both viewers and directors.

The theater has 2 rehearsal rooms, their area corresponds to the area of the stage, which is very convenient in the process of creating new performances. Both halls are equipped with sound equipment, the possibility of video recording of rehearsals is provided. Each of them has a grand piano.

The theater's ticket offices are equipped with computer-based workstations that are integrated into an electronic system for ordering and selling tickets, including online. In recent years, the number of theater audiences in Nur-Sultan has been steadily increasing. The new building of the Astana Ballet Theater will ensure the further development of the cultural life of the capital and make it more diverse and rich.

The Astana Ballet Theater opened its doors to the public on December 10, 2016. Although the new building is called "Astana Ballet Theater", it can accommodate any theater group: ballet, opera, drama. The parameters and capabilities of the stage allow the new theater to hold a wide variety of cultural events and creative meetings, concerts of symphony, pop and folk orchestras, to present musicals, modern shows that use various special effects.

A much-needed space has appeared, which opens up new creative opportunities not only for the theater itself, but also for the development of the choreographic art of the country. The opening of the new theater testifies to the high level of state support for the arts. The emergence of such a theater center on the map of the Kazakh capital will create conditions for the implementation of the ideas of young directors, set designers, artists, will contribute to ensuring a high standard of living of the population, creating an attractive image of the city, will become one of the key aspects of the high competitiveness of the Kazakh capital. Today in Nur-Sultan there is an opportunity to create a creative product of a new quality. The stage of the new theater creates wide opportunities for creativity for those creators who work in various areas of theater art and are not afraid of bold experiments. The stage platform corresponds to the concept of the creative activity of the Astana Ballet Theater and will allow the choreographic team to present original modern productions to the public.

What can the theater give the audience? A special atmosphere and strong emotions, a lively perception of reality and the solemnity of the situation. The new theater house of the Kazakh capital called "Astana Ballet Theater" expects many discoveries and victories. Each season in the theater will be full of major events, and the fascinating and continuous creative process of creating beauty will not be interrupted for a moment. In the Theater, they feel responsible to the audience, they strive to create a festive atmosphere on the stage, to give the audience the joy of co-creation. The new possibilities of the stage will allow you to create bold, avant-garde productions that will arouse the audience's constant, unflagging interest. Sparkling and inspired dance, brilliant performance of parts in performances, the appearance of new talented artists who are destined to become bright stars of Kazakhstan and world choreography - this is what the audience always expects from the Astana Ballet Theater. Both the theater and the audience are looking forward to the premieres, and everyone hopes that the life of the new theater venue will certainly be rich, and every performance on this stage will be accompanied by success.

Repertoire of the Astana Ballet Theater»