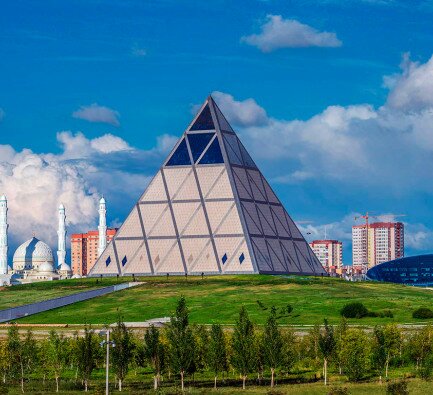 Palace of Peace and Reconciliation

The Palace of Peace and Consent is one of the sightsee­ing attractions of the capital. Pyramid has become a symbol of unity of different religions, ethnicities and cultures, and openness of the people and the state around the world. The idea of creating a «Palace of Peace and Consent» belongs to the President of Kazakhstan Nursultan Nazarbayev and was presented by him on the first «Congress of World and Traditional Religions» held on September 23–24, 2003 in Nur-Sultan. The construction of the pyramid was completed in 2006, and the concert hall was opened by Montserrat Caballe.

This construction was created by world-renowned architect Norman Foster, specifically for the «Con­gress of leaders of the world and traditional religions». Its uniqueness lies not only in the purpose for which it was built but in the principle of «Fibonacci golden ra­tio», to which the pyramid was built. At the base, there is a square with a side of 62 meters, and the height is also equal to 62 meters.

Undoubtedly, the Palace of Peace and Consent is one of the attractions of the capital. Pyramid has become a symbol of unity of different religions and cultures, and the openness of the people and the state around the world. Conference rooms and exhibition areas, art gal­leries, presentation complexes equipped with modern facilitates, and others are located in the Palace of Peace and Consent.

The internal layout of the Palace is interesting. The building is divided into five floors. On the ground floor, there is a concert and opera hall for 1500 seats. There you can hold various meetings and conferences of the international level, various theatrical events, concerts, the opera, and ballet. Acoustics is special like you get in the atmosphere of the ancient Greek amphitheater.

The largest hall is «Cheops Atrium», with an area over 2 000 sq.m. Admits the composition «General Plan of Astana 2030», which is just striking due to its size.

On the fifth floor of the Palace of Peace and Consent, there is a hall «Cradle», which took the world-famous conference of leaders of world religions. «Winter Gar­den» stretched around the hall admiring the variety of vegetation from around the world. A huge pyramid crowned by a glass dome featuring 130 doves symbol­izing the people of Kazakhstan. Dome lights at night and it is like a beacon, showing the way to the symbol of the unity of religions, cultures, and peoples.

Remarkable elevators that move not just up, but also diagonally to the top of the pyramid.